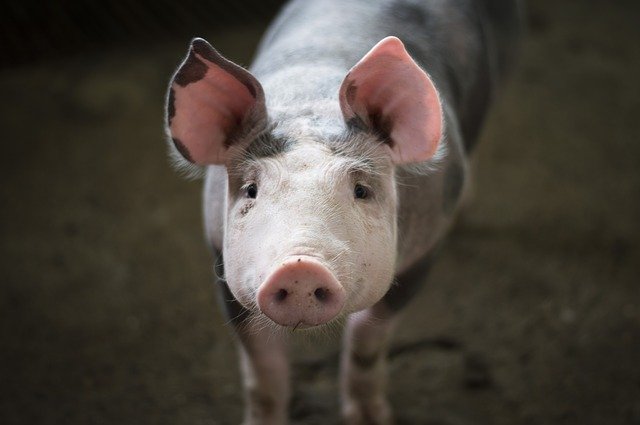 Canadians are speaking out against the Ford government’s Bill 156. What is the government hiding?

The Conservative government’s proposed Bill 156 is a dangerous piece of legislation that would hide animal abuse and prevent animal activists, whistleblowers, media, and others, from performing their vital role in exposing the horrific treatment of farmed animals. Please help us #StopBill156Sign the PetitionDownload Paper Petition

MYTH #1: BILL 156 WAS INTRODUCED FOR FARMER AND FOOD SAFETY AND TO PROTECT ANIMAL WELFARE

Bill 156 was drafted “to protect farmers, and others, from risks” in their homes and at their workplaces in Ontario. The legislation is “intended to protect farm animals” and prevent  “exposing farm animals to disease and stress”.  It balances the security of farmers  and  “the food supply”, with the right of people “to participate in legal protests”. (Source: MPP Ernie Hardeman, Ontario Minister of Agriculture, Food and Rural Affairs, December 10, 2019 – House Debate.)

Bill 156 was drafted at the behest of some in the Ontario animal agricultural sector. Its purpose is to conceal unacceptable conditions at their farms, workplaces and agri-businesses, and to safeguard their financial interests. It is designed to protect profits, while stifling dissent over animal exploitation and appalling agricultural practices and operations. Its goal is to suppress exposure of animal suffering and cruelty – both on farms and during transport. It is an attempt to hide unsanitary and unhygienic conditions extant on many farms and during all live transport. It aims to silence workplace whistleblowers. It will prevent peaceful protests on public property, rendering them unlawful. It allows for “force” by farmers and thus encourages violence. It will allow heavy penalties for any person deemed not in compliance. It essentially criminalizes compassion for farm animals.

MYTH #2: ONTARIO IS AT THE FOREFRONT OF DEVELOPING NECESSARY AGRI-FOOD LEGISLATION TO PROTECT FARMING COMMUNITIES AND THE PUBLIC

“We’re very proud that by bringing forward this legislation, Ontario is helping to lead the development of agri-food-specific trespass legislation in Canada. Other governments are taking steps to support their security as we are, here in Ontario.” (MPP Toby Barrett, Haldeman-Norfolk, December 10, 2019 – House Debate.)

Bill 156 is closely modeled on similar legislation in the United States, known as ‘ag gag’ laws, which have been struck down by the courts in multiple U.S. states as unconstitutional. Bill 156 is contrary to the public interest and is a violation of citizens’ rights in Ontario guaranteed under the Canadian Charter of Rights and Freedoms. Designed solely to protect agri-business, it will not deter dedicated truth-seekers with broader democratic priorities and humane principles; instead, it would expose the government and Crown to liability and thus incur significant taxpayer expense if challenged in court.

What are they hiding?

No “animal rights group” or anyone in the broad-based farm animal welfare community in Ontario can recall any such consultation re Bill 156. Bill 156 was crafted in relative secrecy. There also has been no transparency in the form of disclosure to the general public or animal advocates during the preparation of the bill. We challenge Mr. Hardeman to provide proof of such disclosure and alleged consultation.

MYTH #4: FARMERS’ SECURITY IS AT RISK

At no time have animal advocates, activists, whistleblowers or any other investigators threatened farmers or their families in their homes, nor have any animal advocates or organizations ever perpetrated an act of violence against an Ontario farmer(s), or have been similarly charged. Such egregious suggestions by the Minister of Agriculture impugn the reputations of investigators, animal advocates/activists, media, and farm employees who have exposed, or seek to expose, the hidden reality and typically abusive nature of farming practices occurring in Ontario. The bill will criminalize those who wish to expose and/or publicize the adverse impact that those practices and operations have on both the farm animals and the public interest. 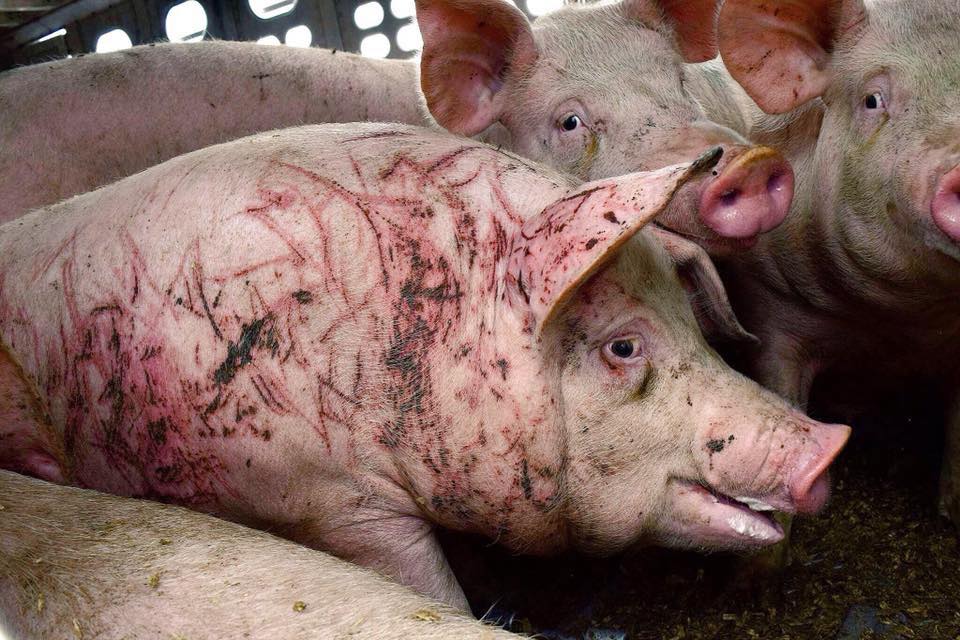 “Our government has always been committed to animal welfare.”
“The proposed legislation…aims to protect the welfare of animals. (MPP Ernie Hardeman, Minister of Agriculture, December 10, 2019 – House Debate.)
“Speaker, there are strong rules to ensure animal welfare, no matter where those animals are located, including during transportation.” (MPP Toby Barrett, Haldeman-Norfolk, December 10, 2019 – House Debate.)

The Ontario government has shown no commitment to farm animal welfare. Agricultural animals are not protected in provincial law –  there are no regulations in Ontario governing agricultural animal welfare or activities on farms. The proposed legislation further condemns farm animals to horrific conditions, by enacting provisions that will deny public scrutiny and penalize those who genuinely advocate for them.

Farm animals will continue to be shipped to slaughter in extreme temperatures, over long distances, with no relief, currently, for up to 36 hours for pigs, up to 36 hours for chickens, and 52 hours for cattle. Additional wait times and extraordinary long delays at border crossings, heavy or slowed traffic, etc. will further add to their stress and suffering. They will continue to be packed into crates and/or transport trucks in extreme heat – without adequate ventilation and with no water. They will still suffer great distress from heat prostration and extreme thirst; many dying on route. In the severe cold, animals will continue to arrive at slaughterhouses frozen to the sides of the trucks, or frozen to death. Pregnant animals will continue to give birth on slaughter trucks, their newborns to die from being trampled or exposed to extreme elements. All of these inhumane conditions run contrary to the recommendations of the Canada’s National Farm Animal Care Council (NFACC) Transportation Code of Practice, yet all have been exposed as routine practices in Ontario.

It is animal advocates and concerned members of the public, not the government, that have demonstrated any consideration or compassion for these animals. 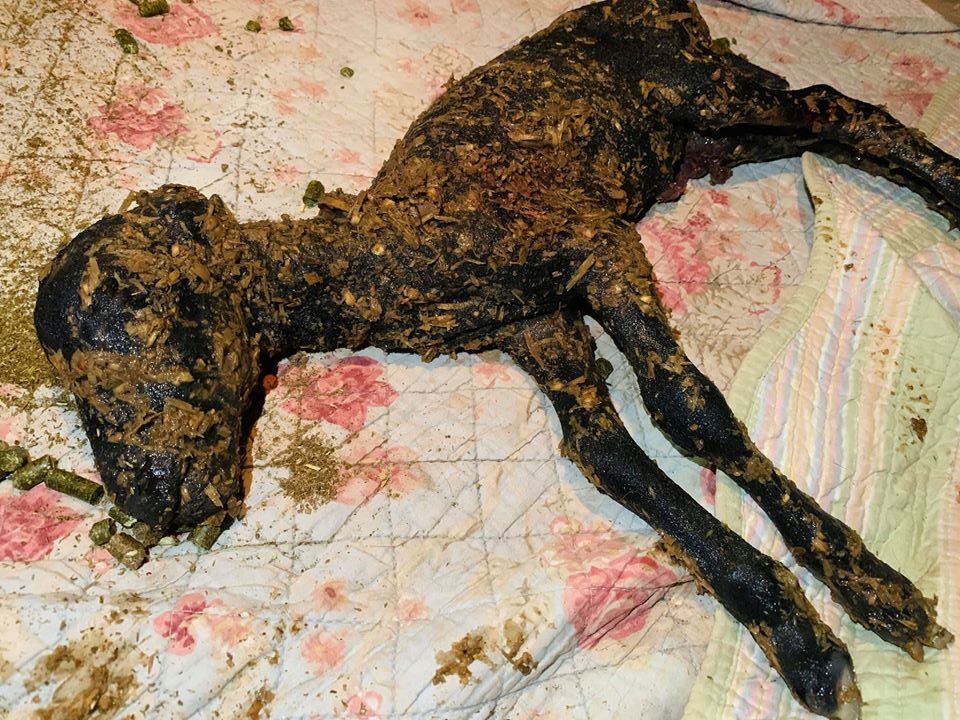 Newborn lamb, born on slaughter truck and trampled to death. His lifeless body was removed by activists.

“…this bill, along with the PAWS Act, is part of this government’s plan to ensure Ontario has the strongest animal protection and welfare laws in the country.”
“Our government feels strongly that there is no place in Ontario for abuse or neglect of animals. We have a plan, and this bill that we started debating today is the second half of the plan.”
(MPP Ernie Hardeman, Minister of Agriculture, December 10, 2019 – House Debate.)

Within just days of passing the PAWS Act in December 2019, Bill 156 was introduced to the Ontario legislature. Although the PAWS Act was an improvement over the old OSPCA Act for domestic and some other animals, it was particularly ominous for agricultural animals. Disingenuous at best, the Ontario government is attempting to hide the complete absence of agricultural animal welfare regulations behind the new PAWS Act. The government’s assertion that the two bills jointly protect farm, and domestic/other animals, is both cruelly cynical and false.

Animal welfare conditions, practices, operations and activities on Ontario farms are in no way regulated by the province, nor are they provided for in either Bill 156 or the PAWS Act. There is no provisional oversight for farm animal welfare in either legislation. The current nationally-developed Codes of Practice, issued by Canada’sNational Farm Animal Care Council (NFACC) are guidelines that do provide some welfare standards; however, while the Codes have been formerly endorsed by the Ontario Federation of Agriculture (OFA), in reality, those standards are typically disregarded by the province’s agricultural sector. Many in the farming industry are either unaware of them – or simply ignore them. In fact, the OFA “categorically opposed” proposed animal welfare amendments to the Criminal Code.* Government collaboration with the province’s agricultural industry to promote adherence to accepted farm animal welfare standards is critical, yet aside from scant references in the PAWS Act, the government has neglected to do so.

Despite years of media exposés, peaceful protests, petitions, and appeals for reform from animal advocates and members of the public, there is no bill, or amendment to alleviate any distress, or protect or improve the welfare of animals on farms, or in transport, either by the federal government or by the Ford government – or by any provincial government. In fact, under the province’s recent PAWS Act, farm animals are expressly exempted. (See PAWS Act, Part IV, Standards of care and administrative requirements for animals, Section 13, subsection 2: “Subsection (1) does not apply in respect of an activity regarding agricultural animal care, management or husbandry carried on in accordance with the reasonable and generally accepted practices of agricultural animal care, management, or husbandry…”) 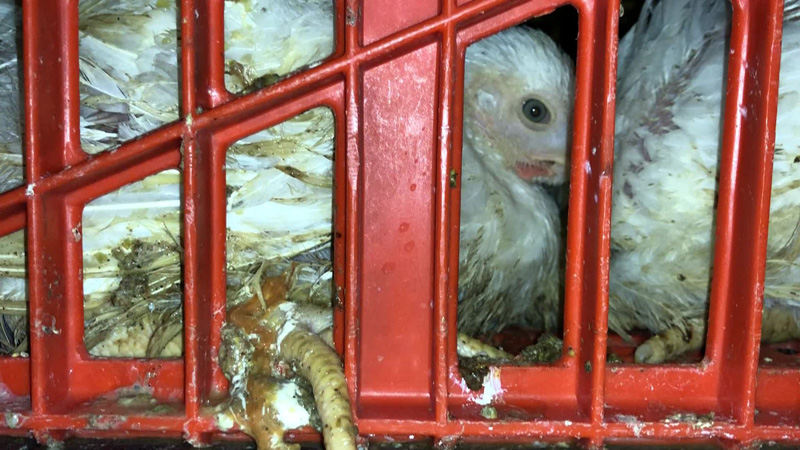 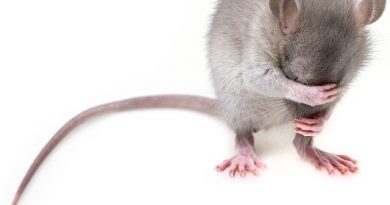 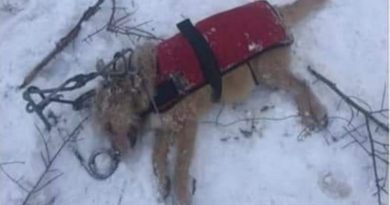 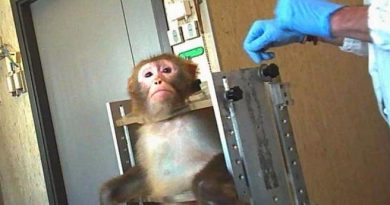 “Project Lightup”: Cruel Research on 6 Macaques. Research has been suspended!

February 3, 2020 ADAV Society Comments Off on “Project Lightup”: Cruel Research on 6 Macaques. Research has been suspended!